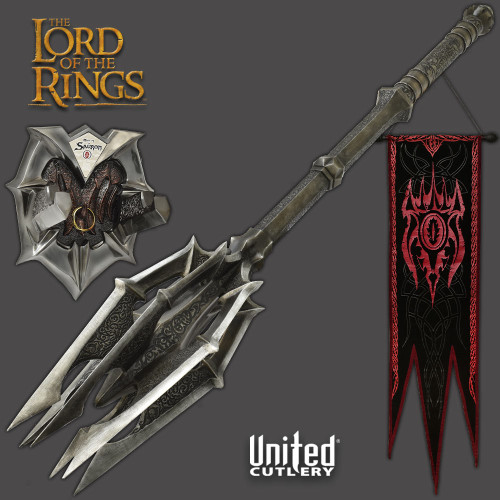 A replica of the massive mace wielded by the Dark Lord Sauron in the prologue of The Lord of the Rings: The Fellowship of the Ring. When Sauron's forces battled the Last Alliance of Elves and Men on the slopes of Mount Doom, Sauron emerged on the battlefield wearing blackened steel armor. In one iron gauntlet he held a massive six-bladed, black iron war mace. On one finger he wore the source of his power, The One Ring. With every swing of this terrible weapon Sauron crushed his foes, sending intimidation and fear throughout the ranks of all who would stand against him. This replica of the actor scale prop used in the movie is crafted of reinforced fiberglass-resin with an aged iron finish. Close attention to detail is a top priority in every piece, down to the intaglio-etched surface and corroded metal coloring. The oversized One Ring worn by Sauron is also included, crafted in gold plated solid metal. Displays on a polystone wall mount (mounting hardware and instructions included). Also included is a 53” in overall length, cloth war banner with the Red Eye of Sauron.

The Lord of the Rings Second Age Gondorian War Shield

The Lord of the Rings Witch-King Sword

The Lord of the Rings Second Age Gondorian War Shield

© 2023 Lord of The Rings Store Powered by BigCommerce All rights reserved. | Sitemap