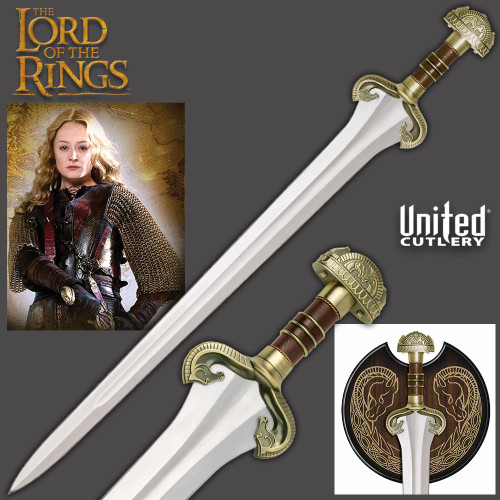 Born in Edoras, Eowyn suffered the early death of her parents, and was forced to look after her ailing uncle, King Theoden, whose health was rapidly diminishing under the increasing control of Saruman and Grima Wormtongue. The beautiful and strong Eowyn was trained as a Shield-maiden, and was considered to have surpassed many Rohirrim men in terms of craft and skill. She carried a full-sized sword, which measured nearly three feet in length, from tip to hilt. The bronze guard and pommel were styled beautifully in honor of the mearas, to improve the grip of Eowyn's small hand upon the sword. The handgrip was crafted with a raised middle section of three bronze rings. A wide fuller groove runs down 3/4 of the blade to reduce the weight, yet still retain critical blade strength. This type of fuller was common among royal swords of the Rohirrim. Against her uncle's wishes, a disguised Eowyn rode with the Rohirrim to the Pelennor Fields along with the hobbit, Merry, in defense of their fallen king. Eowyn achieved true heroism as she succeeded in the slaying of the Witch King and his fell steed; however, she also suffered a heinous injury during the crusade. After being healed by King Elessar, Eowyn finally abandoned her passion for battlefield grandeur and found true love in the arms of Faramir. Constructed with a 30 1/8" tempered 420 J2 stainless steel blade. The handle features a solid metal guard and pommel with antiqued brass plated finish, the hilts are cast in the symbols of the famed horses of Rohan and the grip is genuine leather wrapped. Includes a parchment certificate of authenticity and 11" x 10 5/8" x 3/4" wood display plaque. 36 1/2" overall

Lord Of The Rings Guthwine The Sword Of Eomer