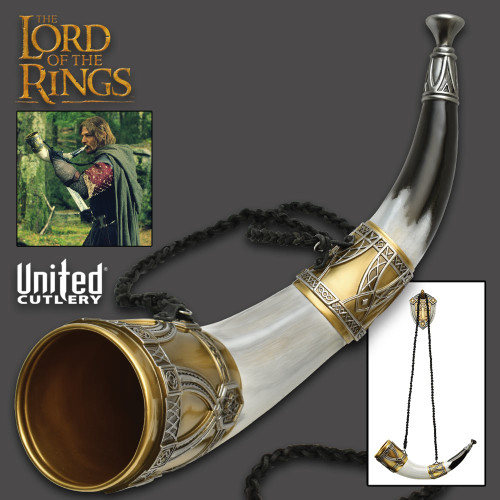 The Horn of Gondor was said to be heard at any place in the kingdom of Gondor when it was blown. Fashioned in the early days of Middle-earth, this heirloom was passed on to the descendants of the Stewards of Gondor, who protected the kingdom until the rightful king returned. In the War of the Ring it was carried by Boromir, the Eldest son of Denethor, the current Steward of Gondor. Boromir was a valiant warrior who blew the horn every time he set out on a journey. He accompanied the Fellowship on their quest to destroy the One Ring, and when he was attacked by Saruman’s forces Boromir blew the horn to call for help and alert the rest of the Fellowship. He single-handedly fought Saruman’s Orcs and Uruk-hai to allow the Hobbits, Merry and Pippin, to escape before being mortally wounded under a rain of arrows. The great horn was broken in the battle and placed with Boromir by Aragorn, Legolas, and Gimli when they sent his body over the Falls of Rauros. The pieces were later found and returned to Denethor. This authentically detailed replica is a reproduction of the actual filming prop built by Weta Workshop and used in The Lord Of The Rings films presented by New Line Cinema. The horn is crafted of polyresin and genuine leather, with precisely-molded details and coloring. It is presented with a polystone wall display, sculpted with the Tree of Gondor motif. It includes a certificate of authenticity.

The Lord of the Rings Anduril Scabbard

The Lord of the Rings Narsil Sword

Lord of the Rings Sword of Théodred

The Lord of the Rings High Elven Warrior Sword