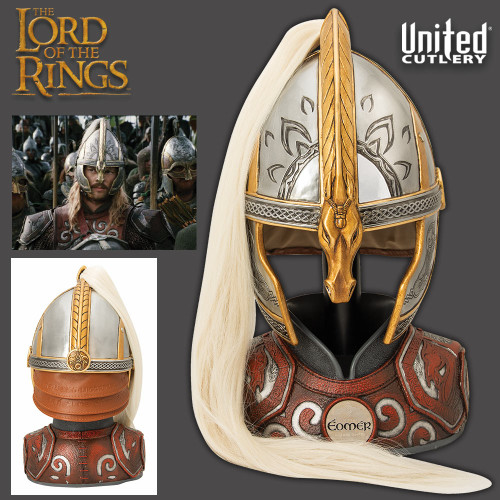 Éomer was a captain of the king’s cavalry, Marshal of the Mark, and one of Rohan’s mightiest warriors. He bravely fought alongside King Theoden against the forces of Mordor at the battle of Helm’s Deep and on the Pelennor Fields, skillfully wielding his sword, Gúthwinë, and hurling his great spear. In the final stand against the dark lord Sauron, Éomer fought alongside Aragorn with the armies of Rohan and Gondor at the Gates of Mordor. His steel helm featured a brass horse head nose guard extending across the crest and engraved horse and sun motifs. He was recognized by his kinsmen on the battlefield by the long flowing horse tail that crested his great helm. This authentically detailed replica is a reproduction of the actual filming prop built by Weta Workshop and used in “The Lord Of The Rings” films presented by New Line Cinema. The helm is crafted of reinforced polyresin and genuine leather, with precisely-molded details and coloring. It is presented with a polystone and wood display, sculpted in the shape of Rohirrim neck and shoulder armor. It includes a certificate of authenticity and each piece is individually serial numbered on a metal shield. Only 1,500 of this limited edition collectible will be made worldwide.

The Lord of the Rings Anduril Scabbard

Lord Of The Rings Guthwine The Sword Of Eomer

Lord of the Rings Sword of Théodred